Use the RASP technique to retrain your nervous system during depersonalization and remain calm in the midst of strong, unpleasant, and even scary feelings.

Human beings have a long evolutionary history. We did not magically appear out of the ether. We evolved from simple species and still retain most of the biological apparatus that our ancestors used several hundred million years ago. Though we possess higher intelligence, much of our behaviors is not very different from our non human ancestors.

There are three key areas of the human body and the brain that control our behavior: 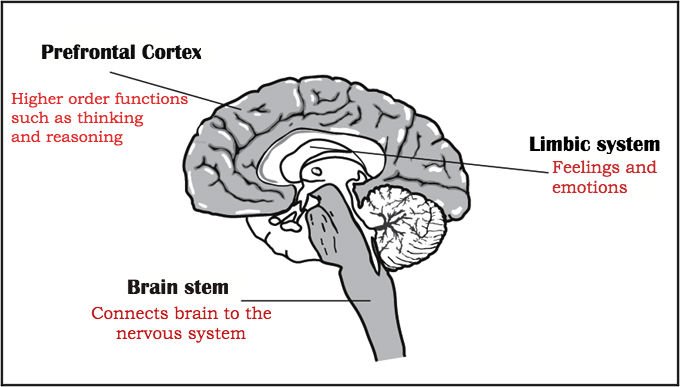 Make sure you learn these technical terms because there will be a pop quiz at the end of this article. Alright, alright, I was just joking. There will be no test, but know that these three parts of your brain and body control most of your behavior including anxiety, panic, and depersonalization.

Our reptilian nervous system was the first to evolve. It is a tried and tested piece of fine machinery that we share in common with animals like rats, snakes and even fish. It is blazingly fast to respond to a stimulus but lacks the ability to perform complex tasks, like reasoning or understanding language.

We then evolved our mammalian limbic system that regulates a number of behaviors using hormones, feelings and emotions.

Only recently in the evolutionary timeline did we develop a portion of the brain that distinctly made us human. This was the prefrontal cortex, and is responsible for information processing, reasoning, language, thinking and making us laugh whenever we hear a joke.

The reptilian nervous system is directly responsible for our survival, and one of its main duties is to scan the environment for threats and alert us, immediately, once it finds one.

Depersonalization and Your Nervous System

You might ask what all of this has to do with depersonalization? The nervous system, which includes the amygdala (a small region in the brain), is primarily responsible for producing feelings of depersonalization, derealization, anxiety, fear, panic and dread.

When the amygdala detects a threat in its surroundings, such as a snake slithering nearby, it immediately instructs the body to produce sensations of fear so the organism, whether a small rat or a human, can quickly take action and get out of danger.

But sometimes our amygdala can become extra sensitive and start to raise alarm bells even when there is no real threat.

Furthermore, the amygdala cannot distinguish between external threat in the outside environment and internal threats coming from inside our own bodies and minds.

Even a thought can trigger the amydala. This is the blueprint of an depersonalization/anxiety disorder.

Whether through trauma, such as an automobile accident or a difficult childhood, the amygdala becomes hyper-vigilant and is constantly on the lookout for threats, even in places of leisure, such as the park or inside a sauna.

It keeps triggering our nervous system which can then become hypersensitive to threats. There’s also vast evidence supporting the fact that such an oversensitive nervous system can be genetically inherited from anxious parents.

So, when anxious people are sitting on the train, and it goes into a tight dark tunnel, it can trigger alarm bells. For someone with normal sensitivity, they would not feel as claustrophobic as someone with an over-sensitized nervous system.

When people with highly sensitized nervous systems step out of the safety of their homes, a threat signal is fired immediately by the amygdala, even when there isn’t any apparent danger.

Realizing this fact can sometimes be very relieving. When we understand that the reason we experience tremendous DP/DR, anxiety, or panic is due to our highly sensitized nervous system, it removes the mystery behind why we are the way we are. It can help calm us down.

Our nervous system is an ancient one. It evolved before there was language and thought. Unlike the advanced prefrontal cortex, which understands human language, the nervous system cannot be reasoned with. When you experience DP/DR, anxiety, or fear, you cannot argue with your nervous system to make it stop what it was designed to do.

So, what can one do to desensitize their nervous system?

When you’re having a nervous episode, or seized by overwhelming depersonalization, you can follow my 4-step RASP technique to calming your nervous system. RASP stands for Remind, Accept & allow, Shift focus and finally Prevent Feedback.

Repeat the above four steps of the RASP technique until you have naturally calmed down. Over time, by using this technique you can slowly desensitize your nervous system by letting it act out and not feeding it with more worry and fear.

If we allow ourselves to experience such unpleasant, and sometimes painful feelings, our nervous system will begin to re-calibrate. Through acceptance we let our nervous system know that we are not in danger. It will slowly lose its sensitization. Given enough time, it could go back to normal sensitivity level.

Our nervous system may be a complex collection of nerves operating at ridiculously high speeds, but if it becomes over sensitized, it can cause chaos in our life. Thankfully, humans also have a highly developed and intelligent brain, which can retrain our nervous system back to its original sensitivity, thereby preventing unnecessary depersonalization, panic, and anxiety.